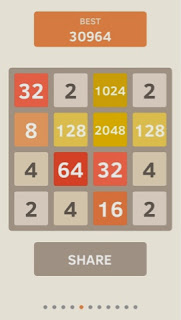 The concept of 2048 is simple: combine 2's to make 4's, 4's to make 8's, bigger and bigger until you reach the 2048 tile or run out of space. It's two game-noises are deeply satisfying, and no matter how bad you are, games last a while. I quickly became obsessed. Eventually I googled strategies and found one I liked (biggest numbers on top, preferably in a corner) and I realized 2's aren't an annoyance, they're the raw materials -- every 2048 is made of a thousand 2s. I achieved the 2048 tile and put the game away.

A week later, I opened it back up, but it felt stupid playing a game I'd already beaten. But the game also featured challenges, which ask you to reach certain tiles within a set number of turns. I did 38 challenges, then discovered the regular game could still be fun post-2048. I could try to beat my high score, and shoot for 4096 tile. I've since reached 2048 six more times, including twice yesterday.

And I'm starting to wonder if I need to issue an edict similar to my years-ago Bejeweled ban. That was on my Palm Pilot, and my screen had squares etched into it by my stylus endlessly linking jewels. I got clean, but fell back off the wagon after downloading Bejeweled for iPhone. I had to go cold turkey to break that addiction, but I'm a recovering gamer and risks remain. It seems i'm in a relapse now with 2048. When I saw numbers combining when I tried to sleep, I took a break. But maybe, just to be safe,I should bury the app a few screens back, between American Airlines and Voice Memos, just to get to be in charge again.
Posted by Tobin at 5:39 PM